Rispek Danis is a culturally appropriate and enjoyable video game about consent created specifically for youth in Vanuatu, a country with one of the World's highest rates of sexual victimization of children. The game is narrated in Bislama, a primary language of Vanuatu, and all dialogue, locations, and music are representative of ni-Vanuatu youth life.
Rispek Danis was designed and developed by Jennifer Ann's Group for World Vision International’s ‘It Takes a World Campaign’ which, in Vanuatu, is focused on preventing sexual violence against women and children. 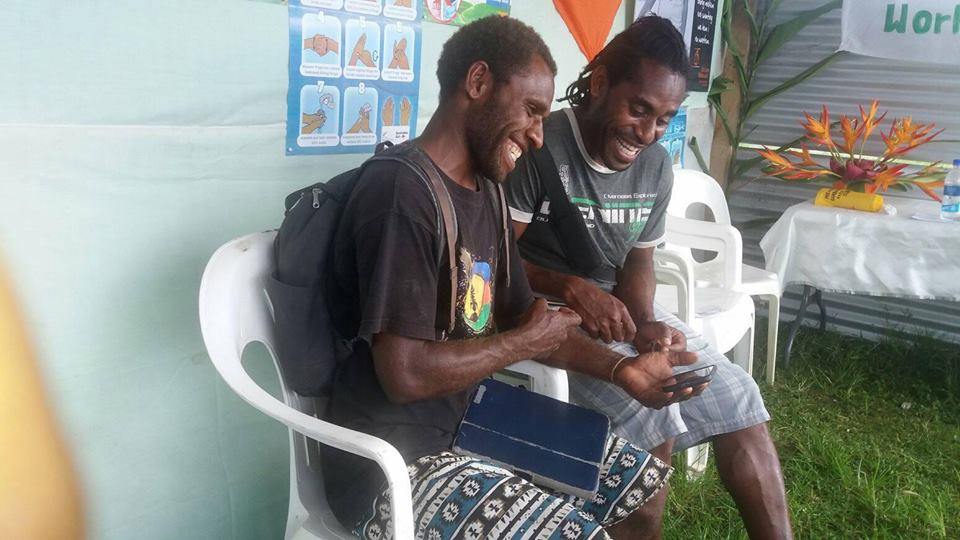 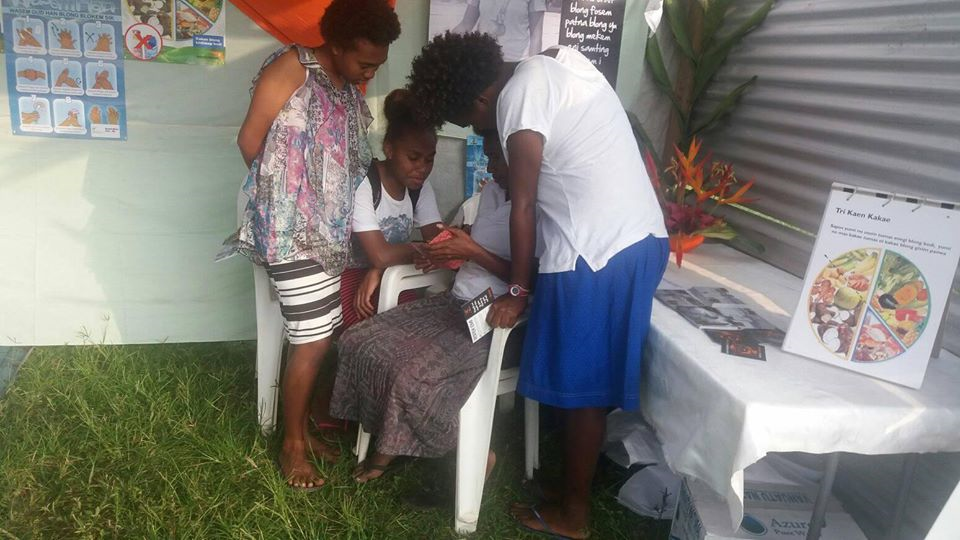 Ni-Vanuatu youth beneficiaries wrote statements about respect and consent after playing the game at a public event on Tanna Island. 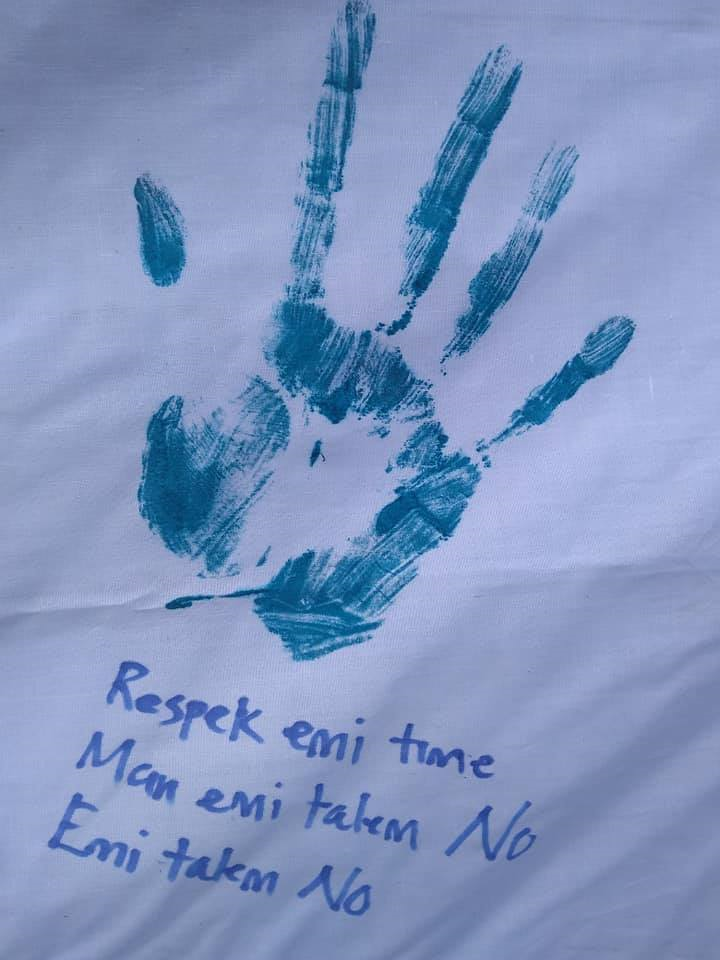 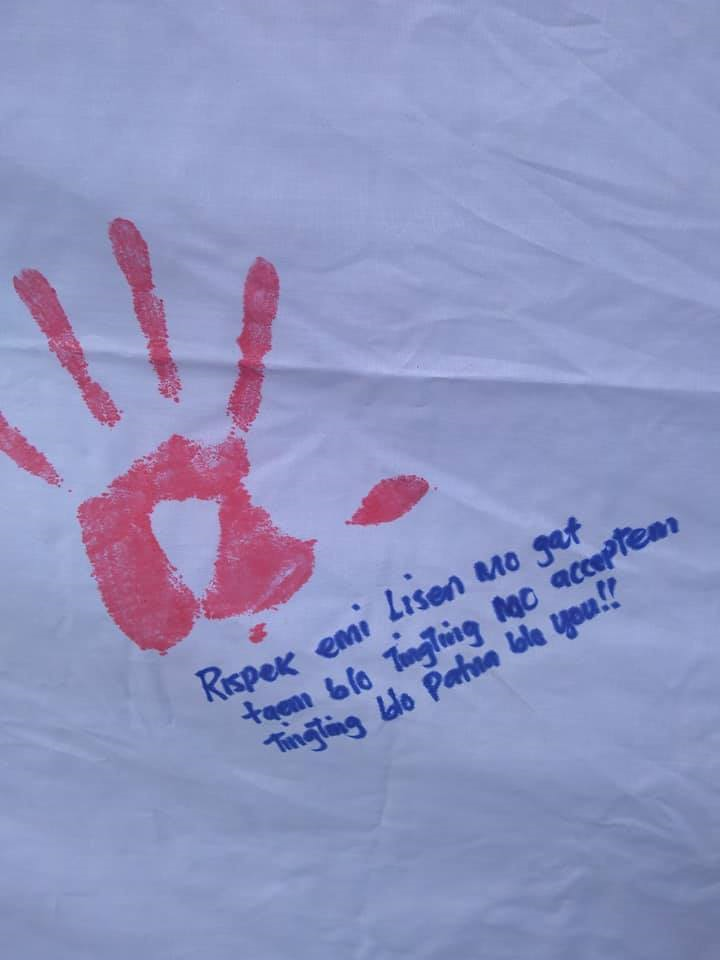 Both World Vision staff involved in dissemination of Rispek Danis and ni-Vanuatu youth who have played the game provided key feedback. Ni-Vanuatu youth beneficiaries wrote statements about respect and consent after playing the game at a public event on Tanna Island and some of those youth statements are shared above.

Staff information was gathered through surveys and one-on-one informal interviews.

The value of this consent game is clear. It is opening up space to allow discussion around consent and healthy relationships amongst groups who are starting their first intimate partner relationships. These are the formative years in which youth develop and solidify their principles.
~ World Vision Vanuatu Staff

This successful engagement with youth is consistent with the experience previously identified with other prosocial video games about healthy dating relationships and dating abuse prevention. Since 2008 Jennifer Ann's Group, a nonprofit charity focused on teen dating violence prevention has produced dozens of serious video games about serious issues affecting adolescents through its Gaming Against Violence program. The games are published by Life Love Publishing. Themes for the games include consent, bystander awareness, gaslighting, healthy relationships, and violence prevention. Non-digital games about power & control will be released in late 2022.

It is narrated in simple Bislama which allows all age groups to participate in it without difficulty. The characters are easily related to which gives the game more effect. I really like the way this games conveys the message on giving Consent. Anyone playing the game can visualize the correct meaning of consent straight after playing the game - Very cool game indeed!
~ World Vision Vanuatu Staff

Watching the youths, both male and female play the game made me feel like this was a better way of explaining something sensitive and hard in a simpler way to these energetic target age groups.
~ World Vision Vanuatu Staff

In Vanuatu young people are more likely to have access to a smartphone than to a personal computer and in order to provide an easy-to-access and free-to-use resource Rispek Danis was developed with smartphones and tablets in mind. This game for ni-Vanuatu youth was offered for free and with no advertisements on Google Play* in order to remove as many barriers as possible to game adoption.

In addition to developing Rispek Danis for those devices identified by local staff as those most commonly used by ni-Vanuatu youth instructions were also supplied to World Vision staff on how to “side load” the game directly to devices. Side loading, although not ideal due to security concerns, allows installation of this game on devices lacking access to Google Play – or that have no internet access at all. Reports from World Vision Vanuatu staff indicate that young people, especially those on more remote islands, side loaded the game to their devices through email, sim cards, and Bluetooth.

The game was also made available to play online in a web browser by visiting the prosocial game portal from Jennifer Ann's Group at https://jagga.me/rispek/index.html to provide access to the consent game via an HTML5 capable web browser for those without a smartphone or tablet.

Google Play* was selected as the official app store for distribution of Rispek Danis based on the popularity of Android-based smartphones on Vanuatu. As of May 2019, Alcatel, Motorola, and Samsung were the most popular smartphone devices downloading the game from the official Google Play account followed by Nokia, Huawei, and Vodafone. The game was offered on Google Play completely free with no DLC, ads, or other monetization strategies. These were deliberate decisions made to better increase the reach, download, and engagement with as many ni-Vanuatu youth as possible.

Rispek Danis was developed to run on Android 6.0+ (API level 23) to accommodate as many players as possible while still meeting Google Play's* security requirements. As of May 2019, Android 6.0 was the most popular version of Android used by those phones that had downloaded the game from Google Play, followed closely by Android 7.0 and 7.1, 8.0, and then Android 8.1 in the minority.

As of May 2019, the majority of the installations of Rispek Danis via Google Play* (76%) were from Vanuatu followed by Australia, United States, Fiji, Indonesia, Papua New Guinea, Italy, Finland, Japan, Jordan, and Timor-Leste.

As of October 2021, Rispek Danis is no longer available via Google Play. However it is still available for side loading to Android devices as well as playing in a web browser. 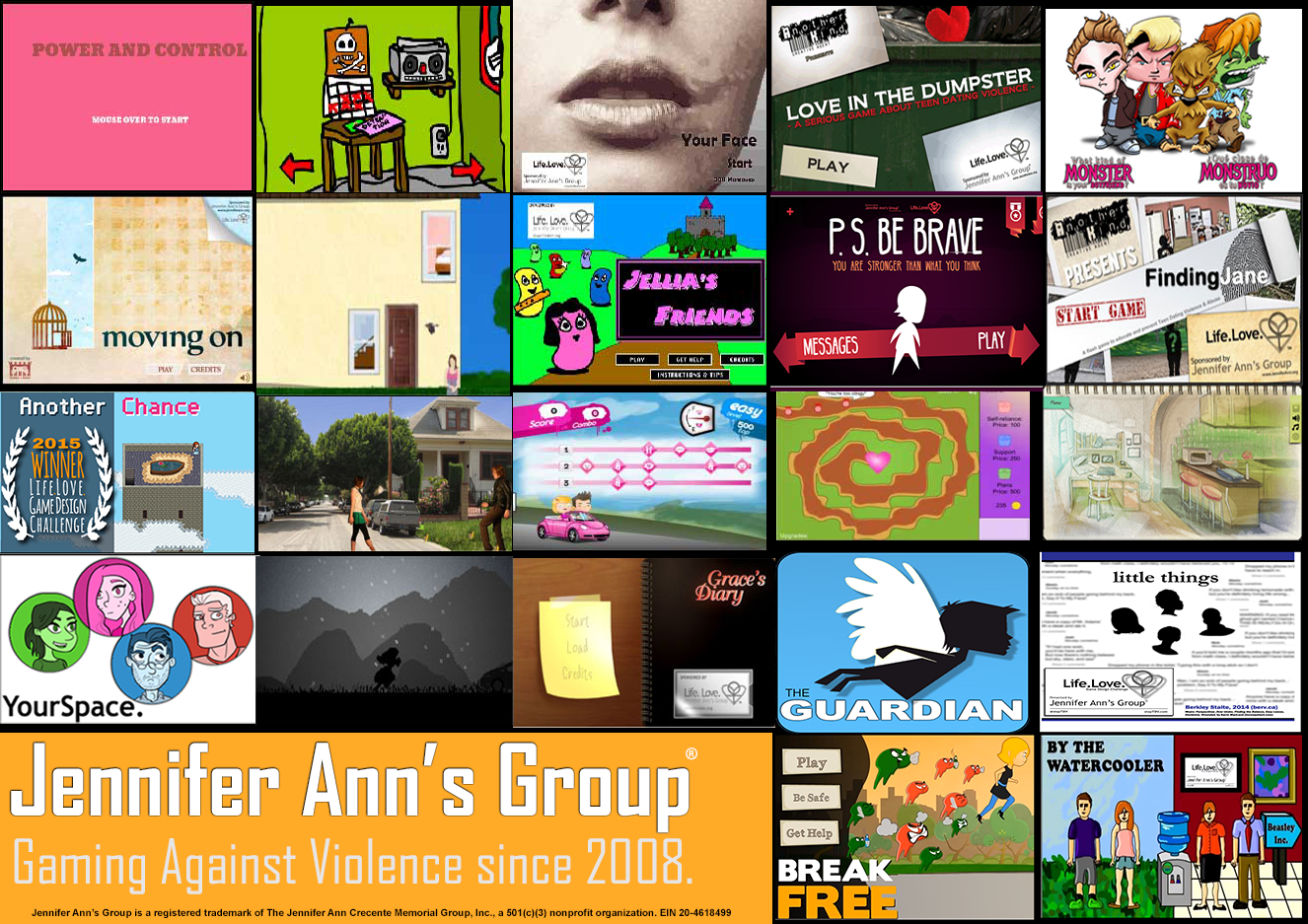 Rispek Danis is one of the serious video games that have come out of the award-winning Gaming Against Violence program. Developed by Jennifer Ann's Group and Life Love Publishing, Gaming Against Violence has been producing, publishing, and researching serious video games about serious issues affecting young people since 2008. Over sixty prosocial games have been produced addressing a variety of topics including bystander awareness, consent, gaslighting, healthy relationships, media literacy, power & control, and teen dating violence prevention.

The use of prosocial games to engage, educate, and empower young people about serious issues is an effective strategy. Published studies show that intentionally designed video games are effective at changing unhealthy attitudes about abusive behavior, increasing knowledge of dating violence, and increasing awareness of teen dating violence. 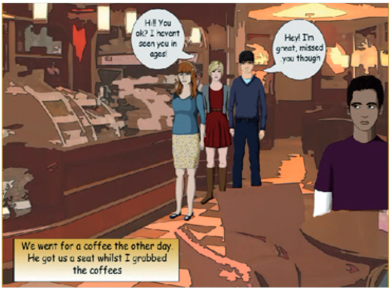 A 2014 study from CAVA discusses their success at developing and using a video game to change attitudes about abusive behavior with students in the UK, Sweden, Germany, and Belgium. One benefit of video games is that their interactive nature is better suited for addressing nuanced issues like emotional or psychological abuse as compared to traditional static content (e.g. pamphlets, toolkits).

Further, video games also support experiential learning, discovery learning, and context learning. Also, the preferences of adolescents are important and young people prefer computers to traditional methods while learning and prefer digital over other mediums. Additionally, they appreciate seeing that their preferences are taken into consideration.

Participants in the CAVA study also stated "I think people are more likely to listen more instead of just a teacher telling you stuff" and "[i]t doesn't feel like you're on the computer an hour because it's like a game." 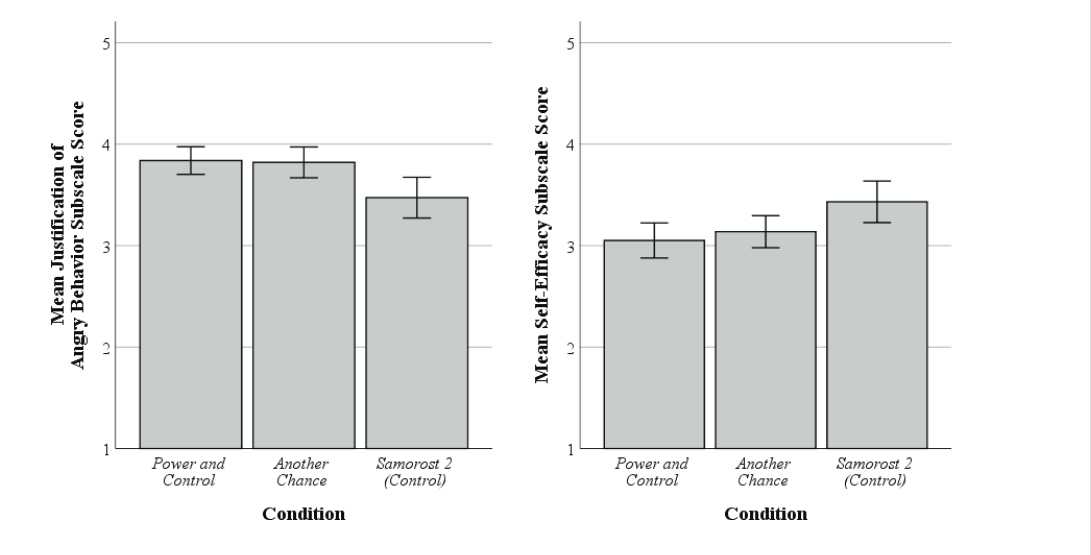 In comparing two forms of persuasive video games from the Gaming Against Violence program, the Erasmus study found that "both persusasive games evaluated showed a clear difference with the control game in the attitudes their respective players held afterwards." Both games showed less acceptance of angry behaviors in dating relationships and also showed lower self-efficacy with respect to dealing with relationship abuse. Although the reason for the reduced self efficacy was beyond the scope of the Erasmus study, one suggested explanation is that as a result of playing these games about teen dating violence the participants had a heightened awareness of the pervasive and serious nature of dating abuse among adolescents. 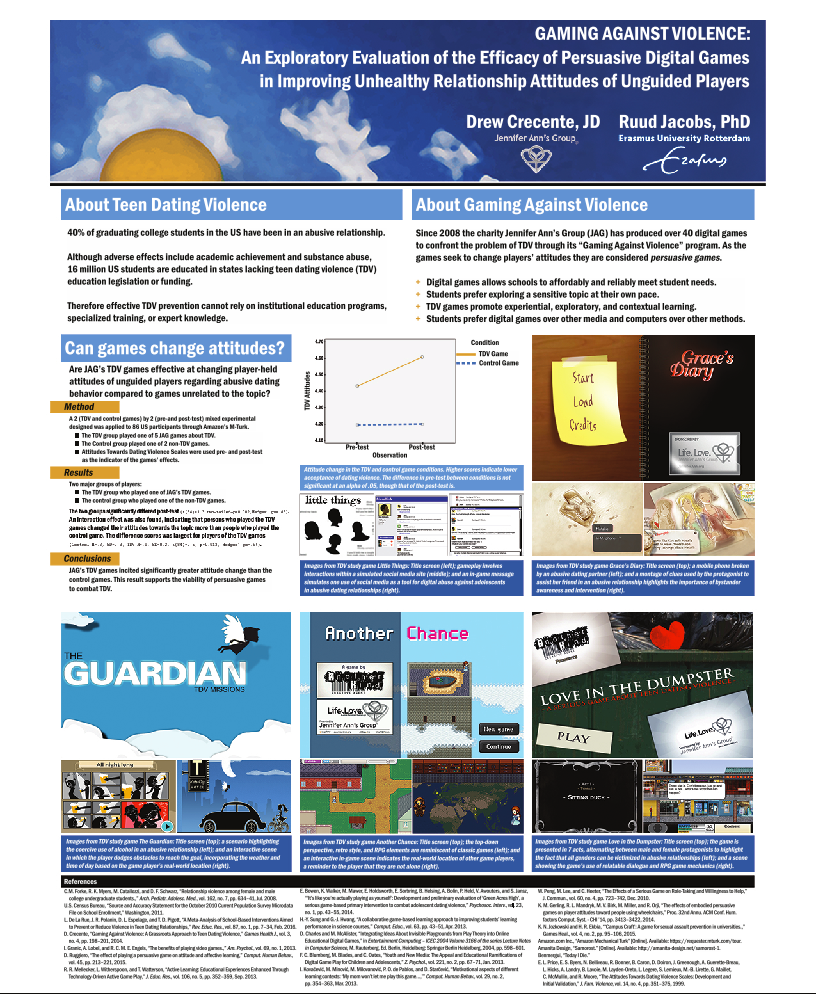 An exploratory study utilizing a subset of five serious games from the Gaming Against Violence program was conducted from November 2015 - January 2016 utilizing online participants via Amazon's Mechanical Turk service. The results of this study were promising, showing that those players playing the Gaming Against Violence games with teen dating violence themes showed greater increase on attitudes towards dating violence than did players of the control games unrelated to teen dating violence. The study "was not large enough to distinguish differential efficacy among the teen dating violence prevention games but did lay the groundwork for future studies to further validate the viability of these games as persuasive tools."

A white paper created in cooperation with the Violence Prevention task force at IPRCE evaluates the problem of teen dating violence and its impact as well as the factors that complicate effective prevention. The paper then illustrates how bespoke prosocial video games such as those from the Gaming Against Violence program can effectively overcome these complications in order to more effectively prevent teen dating violence.

Gaming Against Violence: A Grassroots Approach to Teen Dating Violence 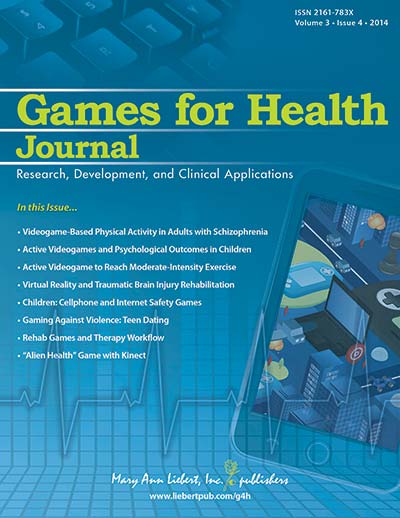 Program Profile: Teen dating violence is a pervasive problem that affects millions of adolescents worldwide. Although there have been various approaches to addressing this problem, using videogames had not been employed before 2008, when Jennifer Ann's Group, an Atlanta, GA–based nonprofit organization, created an annual competition. The Life.Love. Game Design Challenge rewards game developers for creating videogames about teen dating violence without using any violence in the games themselves. The resulting videogames have increased awareness about teen dating violence and provided educational information to assist adolescents, parents, and teachers in identifying abusive relationships. 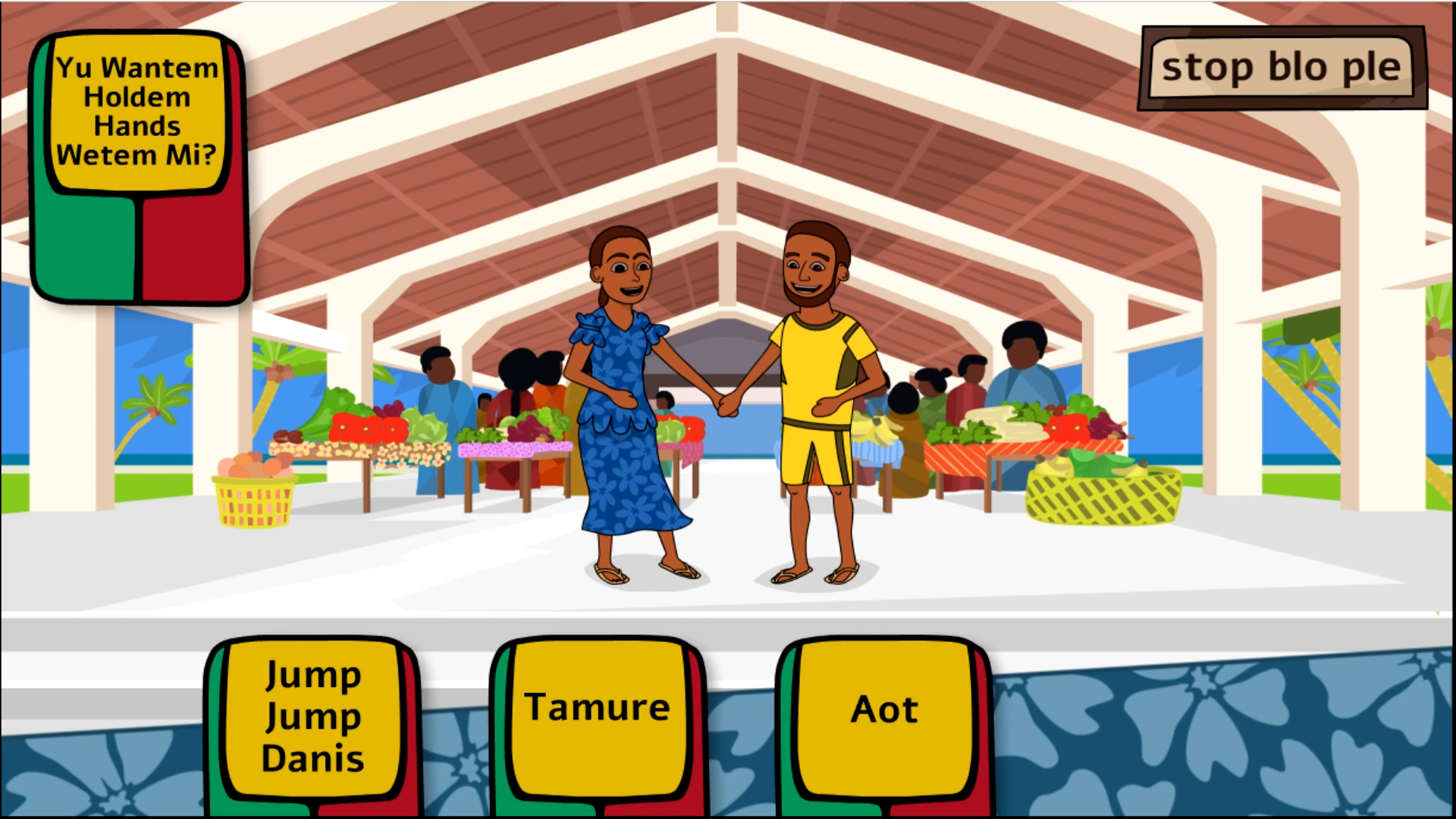 World Vision Vanuatu and Jennifer Ann’s Group, with assistance from the Australian Government, have collaboratively produced ‘Rispek Danis’ a culturally relevant video game intended to teach young people about the meaning and importance of consent in relationships.

Targeting youth, the game allows players to choose a character to represent themselves and a character to partner with for the four game stages, where they practice asking and receiving consent. The game has been developed so that the player has to have the consent of his or her partner before they can proceed to the next stage.

Rispek Danis (the Respect Dance) is a Game About Consent

Rispek Danis is a game made by Jennifer Ann’s Group in collaboration with World Vision Vanuatu. This game takes a culturally relatable approach to presenting healthy relationship habits to the Bislama speaking community (Bislama is the primary language of Vanuatu).

The game is simple to use and can run on older smartphones thanks to its limited graphical demands. Although Rispek Danis is not in English even non-native speakers can understand the simple steps this game lays out. The game is no longer available through the Google Play store but can be side loaded to Android devices for free and will only take up around 30mbs of space to fully install on your tablet or smart device.